The Voice of the Sonoma Valley
Search
By davidb on May 28, 2020 Food & Wine Lifestyle

If you’ve never been to Italy but have always wanted to go, you can save yourself some time, money, and, perhaps, some coronavirus exposure, by taking a shortcut to Ovello.

Ovello is of Italy, but not in Italy, which means it’s a lot closer to you and whatever appetite you have for authentic Italian salumi. It’s actually two blocks from the Sonoma Plaza on West Napa Street and, as Andrea Marino likes to say, “When you cross the door, you are in Italy.”

Marino is the chef and (with his wife, Noreen) co-owner of Ovello, which opened last September after a three-year birthing period and the meticulous renovation of the property that had housed two previous bakeries. He is the real deal, and when he says you’re in Italy when you’re inside Ovello, he means it.

For 15 years he had a Michelin-starred restaurant in the Piemonte region of northern Italy, and before that he worked in 20 other restaurants around Europe, interspersed with teaching culinary classes in Japan and Holland.

His father owned a successful bakery, his grandfather raised and butchered pigs in the family yard, and Marino learned family recipes and cooking techniques from his grandmother, before going to culinary school.

All of which means that he knows his way around butchering, baking, and salumi making, which is not an art that comes easily. Making artisanal salumi, which include a variety of mostly-pork-based dried meats, involves a multigenerational learning curve and the knowledge of how to balance various cuts of meat and fat, combined with herbs and other seasonings, as well as wine and sometimes beer. And when you get all of that right, you still have to know how long to age it at what temperature.

The results of Marino’s knowledge and experience hang in an aging room visible through a large window behind the front counter. Step into that room and you’re instantly in the embrace of scores of hanging torpedoes of meat, the scent of garlic and spices and fragrant seasonings crowding your senses.

Proudly, Marino unties a salami the size of a football and carries it to the hand-powered, flywheel driven, red-line Berkel meat slicer in front, a precision instrument still beloved by artisans and aficionados willing to spend between 10 and 20 times the price of an electric slicer. The classic Berkel is also a retro piece of art that adds excitement and drama to the shop as he stands before it, turning the flywheel that drives the machinery that slices the salami into paper-thin wafers of meat. 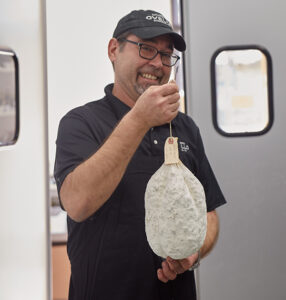 In addition to salamis, flavored a variety of ways to reflect the origins of their meat, Marino ties and roasts at least one porchetta every day. That, in case you’re new to Italian delicacies, is roll of pork loin and pork belly, wrapped in skin and flavored typically with salt, pepper, rosemary, thyme, fennel, sage, and lots of garlic. The whole thing is spit-roasted and then served hot with crisp skin and dripping fat. Watching this drama unfold inside Ovello with running commentary from Marino, and then sitting at one of his small dining tables to taste it, is a special treat.

Ask Marino what the secret is to making really good salumi and he simply smiles and says, “It’s in my DNA.”

He sources the best meats he can find from a broker, all of it vegetarian-fed, antibiotic-free, heritage pork, plus wild boar and a little lamb.

He also makes a stunning chicken liver paté that may erase any residual longing for foie gras, at least in California. And you might want to try his pork tenderloin terrine, wrapped in a coat of porcini mushrooms.

There are specials every day, charcuterie boards, handmade, organic focaccia, salads, whole cuts of coppa, lonzino, and even duck breast prosciutto. Meals are served five days a week to go, or at the small tables in front.

Marino made it to Sonoma because he met an American woman in a Piemonte café and quickly fell in love. That was Doreen, an internal medicine doctor with a home in Petaluma. When he followed her to California, he built a test kitchen in their Petaluma garage to refine his recipes, some of which are specific to Sonoma.

When you visit, you may notice a lengthy tattoo of what look like Italian words running up the inside of his right arm and disappearing into his shirt. Ask him about it and he’ll tell you it runs the length of his body, he got it when he turned 40, and he would have to be drunk before he would tell you what it means. 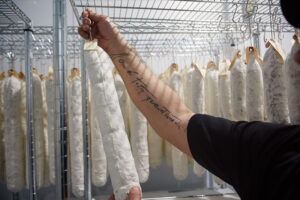 The name of the salumeria—Ovello—comes from a very small wine-growing region (or DOC), where his family has a winery making Barbaresco from Nebbiolo grapes. Marino hopes to be able to sell some Barbaresco wine once he has an ABC license.

There is a missionary zeal to Andrea Marino in any conversation about Italian food. “We are using some things special, we are teaching people to change what they eat,” he says. “We are trying to educate people in Sonoma to original recipes,”

It’s an enticing place to learn, especially since, once you step through that door, you’re in Italy.

Salumeria Ovello is open from 11am to 6pm, Thursday through Monday. Find it at 248 West Napa Street, Sonoma.  Call (707) 721-1478 for more information and to order in advance, or go to ovellosonoma.com.

davidb
Previous ArticleCooking & Eating with Ancient Wisdom for a Modern Lifestyle
Next Article The Gift of Music, Heart to Heart