The Voice of the Sonoma Valley
Search
By davidb on May 28, 2020 Culture Giving

Of all the ways there are for human beings to give of themselves to each other, music may be the most powerful and immediate gift. It is a heart-to-heart transfer, independent of words, explanations, obligations, or interpretation.

On October 1, 2011, a group of itinerant artists appeared in the winery ruins of Jack London State Historic Park and presented a musical gift to some 900 awestruck citizens that hit them right in the heart. There was astonishment on both sides of the stage, nowhere more so than in one of the principal artists, Stephan Stubbins, co-founder and, until recently, co-executive director of the nonprofit Transcendence Theatre Company, which is now woven into the creative fabric of the Sonoma Valley and far beyond.

Stubbins has taken his leave from Transcendence, to return to his creative roots in New York with new wife and fellow Transcendence performer Libby Servais. He will stay on the board and return to perform with Libby in this season’s Gala production. But for now, there’s a new life chapter to explore.

“It’s been a life-changing journey,” he says. “From the very beginning, the wild and wonderful exuberance, the energy that was in our hearts, to go through three years or so of just believing and working toward it, not seeing it come true until we walked into that space and the amazing community of
Sonoma embraced us. It’s been one of the proudest things that’s ever happened in my life, that this whole community can come together, can open up their hearts and really dedicate themselves to making a difference. I’m amazed by how many lives we’ve influenced and inspired and touched, starting with so little.”

In fact, when they staged that first, trial production in 2011, they had $83 to their names. They have since built a $4 million company, have sung and danced to more than 200,000 people, have produced 50 or 60 different productions, have touched lives young and old, and drawn thousands into the Transcendence vortex in which any dream is possible and anyone can have the best night ever.

One recent memory—singing Christmas carols at Sutter hospital—captures how quickly a difference can be made. 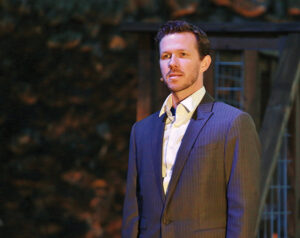 “We were singing ‘Silent Night’ in the baby wards, and mothers came out of doorways, crying, holding their babies. And we were in another ward, I think it was post-surgery, and somebody just opens this door, and we just see a hand come out, with a thumbs-up. We never even got to see the face.

“So I feel like music is just energy, and it’s being able to take that energy that you can generate in your heart, and through those vibrations, send it to somebody else. And I think that’s the power of music. And that’s what can be so transformative.”