The Voice of the Sonoma Valley
Search
By davidb on December 14, 2020 Culture Food & Wine

There’s a glass wall wine closet on a hill top high above Kenwood that’s on the market for $6.75 million.

The seller, a well-known winemaker with shelves of gold medals, might be willing to stock that closet with some his best Sangiovese, zinfandel, Tesoro and Moon Mountain Fortuna if you make him the right offer.

Before deciding, you should probably know that there’s a stunning 3,860 square foot custom-built home surrounding that closet, situated on a private 6.2 acre parcel, with a swimming pool, three-car garage, a family firepit, acres of new lawn, with an artful scattering of Valley oaks punctuating the lawn and the outcroppings of native basalt rock.

You buy the closet, the house comes with it.

The wine closet is less than two miles from Michael Muscardini’s tasting room on Highway 12, so whenever the bottles run dry (there’s room for 1,000 of them), there’s more of that juicy Sangiovese (plus some drop-dead grappa) just minutes away.

The house itself is worth exploring, even without the wine closet. Muscardini was a major Bay Area contractor before his Italian heritage reared up and led him to the grape. So he knows his way around a miter box, a T-square, a Skillsaw and a construction loan.

And he paired himself on the wine closet project with old friend and Sonoma architect Jeff Zimmerman who knows his way around modern contemporary home design and was the perfect yin to Muscardini’s yang.

“Jeff’s a team player, he’s not a big ego,” Muscardini says. “We had such a great time.”

Among the notable features of the home is 4,300 square feet of Italian-made porcelain tile that covers the auto court, flows right through the front door into the interior great room, uniting the kitchen, dining and living room area before flowing back out the opposite door to cover the elevated dining terrace.

Those massive doors, by the way, are Fleetwoods, 10-feet tall, on pivots and they close with the satisfying thunk of a Mercedes Benz.

Walls are another interesting feature, built from board-formed concrete, which gives a surprisingly warm industrial texture with endlessly interesting patterns.

The master suite has his-and-her walk-in closets (bigger than some bedrooms), floor to ceiling windows and a Thermory ash–floored corner deck perfect for meditation or navel-gazing.

Off the opposite wing are two more bedrooms with exterior doors to an outside patio, with walk-in closets and en suite bathrooms. There’s also a large office that could double as a guestroom, a laundry room, 9.92 kilowatts of solar power from 31 panels with a Tesla battery backup, and a dual-zone a/c heat pump.

You won’t find a lot of use for the heat pump because there’s radiant heating in the floor and telescoping sliding doors promote air flow throughout the house.

The kitchen features double waterfall island counters of Italian quartzite, with Sub-Zero and Wolf appliances, plus a pantry large enough to live in.

Muscardini says the whole project took just 14 months to finish, thanks to Zimmerman’s responsiveness and expedited County permitting because they were replacing a house burned in the 2017 firestorm.

Which brings us back to that walk-in wine closet. Make Muscardini an offer and he might throw in a mixed case. 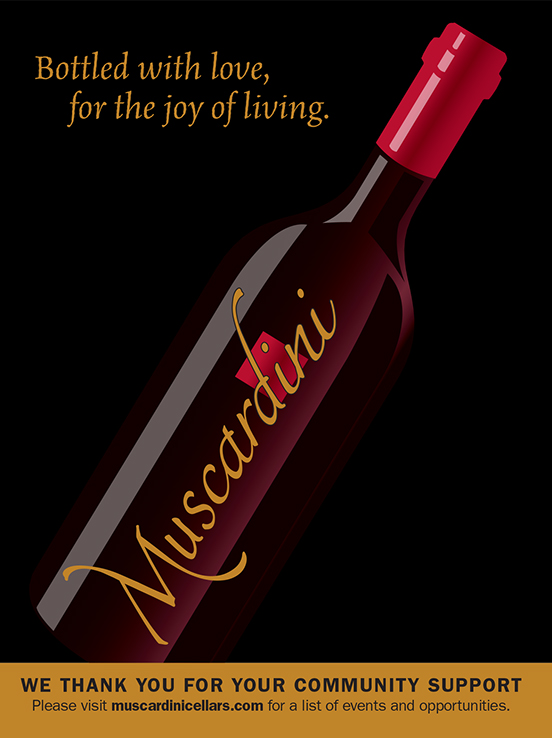